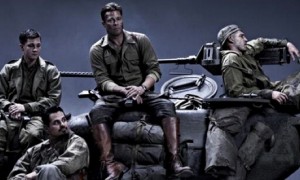 April 1945. The Allies are by now in Germany and the Third Reich troops are but a dying and bleeding beast, and as such more dangerous than ever.
Confusion reigns over the rubble and debris of cities, small and big. Streets are treacherous hazards that one must still cross to get to a piece of stale bread.
Troops fight, in the background of this tragic bloody sunset, without really even knowing why.
They go on because these are the orders, because this is the only way to make sense of a muddy landscape, having lost sight of any flag.
The job of the Americans in particular is to kill as many Germans as possible. That’s why they are paid for after all, and the only certainty they have is that only he who shoots first will remain standing.
Theirs is not a a fight for freedom, for an ideal, for some thinking, but a simple matter of survival.  For War washes away all ideas from the looks and eyes of those who fight.  One day at the front in the end means surrendering to the most basic instincts, going back to that law of nature that makes you hunger for food, sleep and the intimacy of holding tight onto a brother who can keep you warm at night when it’s cold, but still stings you because he is as scared as you are.

The best thing about Fury,  a film that is less innovative than one would want to believe, is that it tells the story of a group of soldiers who must share first of all the dread of death, a theme dear to the italian poet Ungaretti.
These young men are forced to stay in the same regiment by the rules of an army that is your enemy much like everything else you fight against at the front.
They are young men who do not know each other enough, and who better not get too close because in a trench you are “like leaves on a tree in the Fall”.
Too soon these men must learn the horror of giving up the dream of thinking of themselves as “good”, because the hunger for life does not come to compromises with obsolete ideas like Good and Evil.

When private Norman Ellison arrives on Sgt. Wardaddy’s Sherman tank, the law of survival of those who fight on the front line shortens all the times of the most classical novel of formation. In War there is no time to understand. Waiting between seeing and pressing the trigger is too great a luxury.  And the rookie who had been trained for a paper war who finds himself assigned as a replacememt in a tank crew is like insult and injury going together hand in hand.
Wardaddy knows full well that that man, young and inexperienced who never saw war, perhaps not even in the movies, is a big problem. Not only because he doesn’t know how to fight, but because his values have not yet confronted the certainty of death. His innocence therefore must be stained as fast as possible because it is the weak link in an army that cannot afford the luxury of having hands that are too clean. Nevertheless that innocence cries in the eyes of the others with the power of a memory and a regret. The memory of when they were equally innocent, before the war, and the regret of not having been able to shine a glimmer of that beautiful light in the horror of battle.

What really works splendidly in Fury is the description of this mix of feelings, love and hatred entangled in a knot that is too tight. Love for the other and hatred for oneself and for what one accepted to become.
In these obscure confines, oblique and painful interpersonal relationships weave together, where feelings are likes shards of glass wounding both who feels them and the others, in an ocean of contradictions almost as huge as is fear itself.

This mosaic proves successful because whenever the film takes the narrow dimensions of the camera drama it can count on an acting effort that is at times superb.  The work spent by each single character on the implicit subtitles of his role is quite impressive. Brad Pitt shows a convincing synthesis between fatherly feelings and war fatigue, and delivers a character who is less auto-ironic and more torn.  On the other hand Logan Lerman builds up his character without falling into the stereotype of the green rookie, and succeeds in mixing together the right amounts of repressed anger, fear and an ineluctable sense of a lost adolescence, striking a difficult balance between his emotional adherence to the character and the need to keep a critical distance..Finally Shia LaBeouf’s character is credible. He never stops having faith, is never naive and carries all the weight of hands that remain stained with blood anyway.
Their acting test results convincing first of all because they find their raison d’etre in the teamwork,  in a group that works well together because each has found his place.

Fury is convincing in its ostentatious refusal of any war rhetoric and the striking precision with which it dismantles the figure of the war hero. Soldiers here are not fighting for a flag or some political ideals, but for that last piece of world that they can still call home: the belly of the tank.
Even when they take on the suicide mission of maintaining their position with little or no weapons left, these men do not assume epic dimensions, and remain just men. Their decision is not borne out of a desire of greatness, but resides entirely in their smallness. It’s more insane than heroic.

Fury loses altitude in the moments when it moves out of the close up shots and seeks the wide angle of History.
Furthermore its action is unconvincing for a film of its genre (too fast moving for the times of a tank and yet too slow for the contemporary public), and so is its mass.
It doesn’t yield to the temptation of making horror aesthetic, but neither finds the way of a plain and simple realism that would have probably made it look better.

It is however a solid film with a great idea of cinema of its own and a reason behind it.