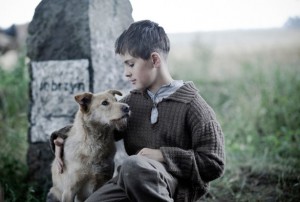 Srulik is nine years old.
He flees the Warsaw ghetto with only a few memories to weigh down his pockets during his journey.
Guiding him are the last words his father cried to him shortly before he left him, in one last gesture of desperate hope: “Forget your name. Forget me and your mother. Your name from now on is Jurek. Pretend you’re a catholic, but don’t ever forget that you’re a Jew”.

In Run Boy run (Lauf Junge lauf) the vastness of the horror of the Shoah is reflected in the sorrowful drop of the theme of identity,  as it is in (Mr Klein), though with less philosophy, and in (Europa, Europa), withouth its overload of over authoritative vocations.
Pretending and being, knowing oneself and forgetting, denying in order to move ahead: such are the boundaries within which the little protagonist’s conscience flounders. He soon learns his new name, but he still needs to be taught how to play the part of the devout catholic child that is supposed to save his life.

The film does not climb up the paths of child psychology, and does not seek out the cold air of abstract thought. Rather it lets Jurek steer through problems using the few tools he picked up along the way during the nine years of his little life.

These problems however sound as the endless, inevitable and persistent bass accompaniment that plays along the theme of the strenuous fight for his life.
Two cuts, physical the former, spiritual the latter, that eventually mark a scar which defines a bond that cannot be severed any more.
And that’s because his own culture is the reason for his persecution and at the same time the condition for his ability to survive.
With this theme slowly pulsating throughout the entire film, as would an underground river which surfaces in the folds of history whenever it finds a way out, the director composes a film featuring all the characteristics of a children’s story of old.
Srulik/Jurek gets lost in the woods like a child in a fairy tale. He finds other Jewish children who teach him how to hunt, how to steal chickens from the peasants and how to to disinfect the scratches he got by running through the brushes by urinating on them.

The horror of the story follows him up close, but his childhood legs are faster and soon enough they can carry him  a little further away from the abyss of fear. He never sees the gas chambers or the cremation ovens, not even from far away, although their presence looms in front of the spectators’ eyes and they fear for the boy’s fate, though the end is after all known already, since the events are based on a true story.

So his incredible odyssey never gives way to the horror of the Holocaust film, and instead stays within the boundaries of a cruel fable.

Lauf Junge lauf is, incredibly, an adventure film over the background of history’s tragedy.  A Hymn to Life which succeeds in achieving the miracle that Benigni missed with his (La vita è bella): to remain within the limits of a fable without negating the abomination of the Shoah.
It’s a film that escapes the classical coordinates of so many similar movies which first and foremost look for flashes of light, reasons for hope.

Here barbed wires, agonized screaming, dogs barking at night, trains and running barefoot on the snow (archetypal images of what has become over time a real cinematic genre) remain on the edges of the shot, as an obsessive voice over that appeals to our collective memory.
Thus in Lauf Junge lauf, Memory is not the goal of the story, but its starting point. It is not meant to teach those who know not, but to speak to those who know or at least think they do.

This work is is classic and riveting enough to appeal primarily to children.

It’s a tale that opens up to vertigo only in the finale, when we finally meet the real Srulik, who survived the horror and is made strong in his newfound identity.