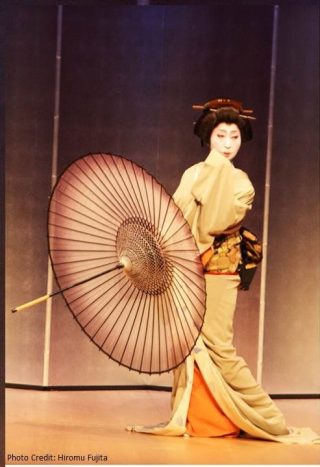 The first image is that of an apocalypse that screams from a place between the screen and the stage.
A thousand voices, a thousand sounds instantly falling into silence. All at once. They were there, but we hear their sound only when they stop abruptly, when silence has taken their place and what remains is the impression of an echo that perhaps resounds more in us who want to continue to listen than in the air that has been swept by other winds in the past seventy years.
The horror of it was consumed well before the beginning of the show and now we have nothing left but the story. A dry, contracted one. Reduced to a gesture, as a Webern work where an entire symphony fits in the space of a few seconds.
This emotion is both Western and Eastern because annihilation knows no cultural barriers and imposes itself with its factual evidence  to the attention of the viewer.
And so Sakura begins with a framework of pure and immediately symbolic evidence.
On the stage there is only silver fabric reflecting a cold light. Few images on the screen and a sound as unobtrusive as a dark threnody, are assembled over a voice which tells of ruins, of the bare outlines of a catastrophe that is carved into the landscape, and also in the memory of an entire nation.
Then the curtains are shaken, they move and finally rise in the tension of a form that remodels itself under the astonished gaze of the public. It is a visual and sound gesture at the same time, in which the rubbing, heart piercing sound of material adds to the modulating image that is carved into the space. Cumbersome, intrusive. Unable to stop itself. Continuously stretched in a movement that hurts like a constantly open wound.
Only at the end of this composed entanglement, which has at the same time the dimension of an agony and the paradoxical impression of a cocoon that is hatching to take flight, finally emerging from this nothing made of shreds of tragedy, comes Keiin Yoshimura.
As if she was coming out of the radioactive ash blanket falling like deadly snow in the days following the nuclear catastrophe.
But this snow, falling from the sky with gentle kindness, was not only that of the bomb as Sakura suggests. The mantle that has buried two cities,  though still revealing the sense of ruin, is not just physical and real. It is also a cultural cloak that is based on a deep shock of which nobody speaks. It is the shock of a nation that suddenly bends her head in front of a conqueror, and gradually allows itself to be transformed. It is the shock of a world that had thought of their Emperor in divine terms and sees him now sitting at the negotiating table at the same level of the victorious stranger. It is the shock of a world that begins to speak a new language and to change minds as they change the words to tell the world. It is, above all, the shock of a sacred feeling that, was once based on the constant alternating of the seasons and where everything had its own spirit and its quest for balance, and must now come to terms with the horror of a bomb that has subverted all order turning into a nightmare even what comes from the earth, and that would be born from the womb of women for many years to come.
So the soundscape that is kneaded into Stars and stripes for ever (but also of Schumann’s lieder), along with images of video projection, gives us the sense of a tradition that disappears, buried by a new one that does not come from within, but is painfully imposed from without.
Yet in this post-apocalyptic space that speaks a language that had to learn new words to say old things, remains the memory of that old world that somehow is not dead and perhaps not yet even museum material.
In a gesture, that is traditional but made new again by Keiin Yoshimura, grows the knowledge that only that world can be the reservoir for a prayer for peace, that only the respect for an ancient language can authentically bespeak of a modern feeling.
And so we see coexisting with the threnody of the Requiem for the nuclear holocaust victims a feeling of prayer that is filled with hope, even though we never stop staring at its horror.
In this coexistence of opposites probably rests all the emotion of the viewer who faces a show whose intensity contracts more and more as he descends into it. It’s a poem that asks us to understand (through a language whose conventions  the Western public knows little about), but that also knows how to yield to the plead of being able – first of all – to feel.