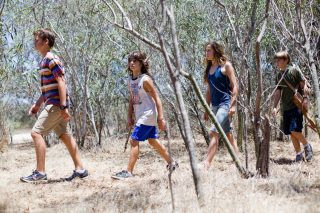 What destiny is in store for the children of Israel today? How do kids who eat bread and war every day grow up? What values are transmitted to them by a generation of fathers engaged in a conflict for which there seems to be no end in sight?
Land of the little people, the only Israeli production in the official selection of this year’s edition of Rome’s  “Festa del cinema” walks along the crest of this forever denied childhood. It does it the hard way, by hitting the viewer straight in the stomach.
It is the way of the brightly colored drama, that doesn’t make concessions to anyone and chooses to follow the guidelines of an exemplary story, ready to slip from fairy tale to horror, capable both of reproach and foul play in a necessarily fiery debate.
A tale where the children’s clean faces are stained by the black dirt of the adults’ choices and where innocence, if there ever was one in this bloody land , succumbs in the general collusion.
Land of the little people begins with a note of displacement. It shows us children in a wild land, between trees and dusty land, among the ruins of a post-apocalyptic scenario that, as we will learn later on, used to be a military camp. The children are hunting with bows and arrows, as if they were on a deserted island. They seem forced to be self-sufficient even as they look for food, but the prey they are hunting is not for them, but is intended to a mysterious entity that lives in a pit and must be appeased with sacrificial offerings. 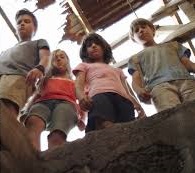 It feels like being around The lord of flies, though these children are not living in a deserted island and are not the survivors of a plane crash that took them away from their families and from civilization.
These children are our own neighbors, those we see play in the playground and smile at us when their eyes meet ours. The minute they cross under the barbed wire delimiting the premises of the old military building, they come into a small town like any other, with its condominiums, its supermarkets where you can have hamburgers and French fries, and its schools, presently closed because the summertime fills up the days with sunlight.
This crossing between two worlds, the world of their adventures and the everyday world, is the poetic core of the entire movie. On this side, in the so called civil world, the children are the smallest, the most vulnerable victims of the neighborhood bullies. On the other side they are the ministers of a magic ritual and their prayer keeps a beast at bay in the dark pit of collective denial.
But the prayer they repeat to the obscure deity that occupies their worst nightmare is always the same: “eat them and not us”, which is more than just a simple formula. Rather, it is the affirmation of a value system in which you must attack in order not to be attacked, and war is waged to prevent others to wage war against us.
The measly rusted barbed wire between here and there is never really a true demarcation. The inside and the outside reflect upon each other and recognize each other. The magic ritual of which they are the bards is nothing but a childlike replica of the same system of values advanced by all the adults around them. They are all from military families after all (as is obvious for a nation where mandatory draft and calls to arms are commonplace), and therefore these children are hardened by the experience of living separated from parents who are called to fight a battle after another. Some of them, like the little girl in the group, will not even see them again because they are killed in action (as heroes, as the mothers that stayed back reminds them, to lick the wounds of the shattered family).
After all their beloved parents are for the most part absent. They never engage in a real dialogue with them.  When they run out to an area that should be off limits, the best they can come up with is ask them where they are going and to please come back soon.

They are almost unaware of their problems, and how they can’t stand living in a world where they are abused by those who are older than them and where you can actually breathe war, even in the lazy afternoons, among the tree branches, in the subdued chirping of insects.
When their hunting ground is suddenly occupied by two deserters that ran away from the front, their reaction cannot be other than one of open conflict, also because those soldiers, by avoiding the war, refused to put their life on the line as their parents did. They are not heroes like the father of the little girl, whose smoldering pain shows in every frame the director spends on her.
The ensuing descent into the gloomiest depths of horror remains in the confines of a plain realism; no need to turn to a different world to find noir, since daily life is itself already horror.
In this story the director’s look maintains the irreconcilable extremes of the Greek tragedy, where each character has a point of view that can be be shared despite the distortion imposed to the world by war. And in each character he feels a drama that cannot be dissolved in catharsis.
Lucid and disenchanted, Land of the little people wraps it all up leaving us feeling uneasy, and demands the Israelis to ask themselves not so much what kind of a world they are handing on to their children, but above all how they are teaching them to measure and make sense of that world.
And in the end it leaves us fully aware that those children who are capable of such monstrosity continue to remain always, despite everything, just children.